A taste of New York City. 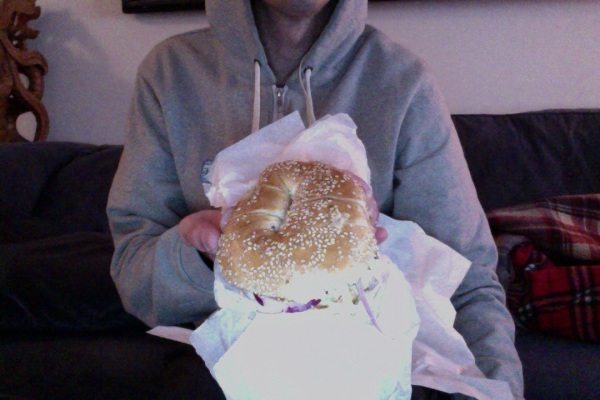 They say there’s magical powers in the water of New York.

Well, let me tell you something. It’s clearly true, because I ate a bagel, and now I’m a
famous comedian.

That’s right. It’s on. You know it works, one minute I’m a dumpling eating nobody, the next I’m invited
to perform, that’s right, in New York City, and with none other than this guy!

Whoa. He’s on TV, so clearly I will be now as well, and you know what that means! Money for nothin! I’m gonna be rich and powerful, and probably get to meet Kati Perry, even though I spelled her name wrong, she won’t even care, that’s how famous I am!

Damn. I performed with Ben Kronberg. It is so on. You know it. Don’t bother calling me, I will ignore you.

Wow. I crushed it so hard too, it was like I was Arnold and the world was Lou Farrigno,
and the show was a cyber version of Pumping Iron and I was just laughing, because it was just like cumming (this will look weird if you don’t know Pumping Iron or watch that clip i just linked, so do it asshole.) and I am the comedy
version of mister universe, and Ben Kronberg was high fiveing me, even though fiveing
isn’t even a word, and I was done, and then Billy Wayne Davis face humped the crowd with the collective joke penis we in the industry like to call punchlines.

And guess what? he’s got a beard too!

Man, we killed it everything bagel style. None of this plain shit, we brought out the poppy seeds and stuffed em in peoples laugh holes, even though that doesn’t even make any sense.

Look, long, boring story short, I CRUSHED IT IN NEW YORK CITY and the crowd was chanting…..

And they did the wave and a guy with a mohawk crowd surfed.

And I swear to god, the show wasn’t cancelled because of some CMJ music industry bullshit,
because why would anyone in their right mind cancel a comedy show for some dumb
music shit, because people can have music all day and night, but how often does a Jewish
guy with glasses and a moustache do a comedy set in New york? I swear, it wasn’t
cancelled, it was the opposite actually, the bar had Radiohead scheduled to stop by for a

surprise jam, but then said, WHAT???? You can get Mother Fuckin David Deery up here,
and he’s been eating magic bagels?

FUCK RADIOHEAD AND MUSIC AND CMJ AND MUSIC AND EVERYTHING,
WE WANNA SEE THE RZA OF THE STAND UP GAME DO HIS MAGIC WHILE TWO GUYS WITH BEARDS DANCE NEXT TO HIM AND THEY ALL DO SOME MAGIC HO DOWN ACID RAIN DANCE WHILE THE GRATEFUL DEAD PLAYS OVER THE SPEAKERS.

And I did. I laid em out, then I went a stuffed a piece of pizza in my face in like three
seconds, because that’s what Louie is secretly telling us to do when you crush it in
New York, because we all know there’s absolutely no fuckin way Louie eats that slice
BEFORE he performs. No way. What the fuck? Is he like, “Oh yeah, need some energy
for my gig at the Comedy Cellar, I better slam down this huge slab of cheese and
carbohydrate board.”

One thought on “My first stand up gig in New York City!”