Thanks to the Bright trade show, I once again bumped into an old friend from my San Francisco skateboarding past. This time it was Kent, the owner and mastermind behind FTC, the legendary skateboard shop from SF.

I used to go to FTC almost everyday in the mid 90’s when I worked up on Haight Street. Good times. 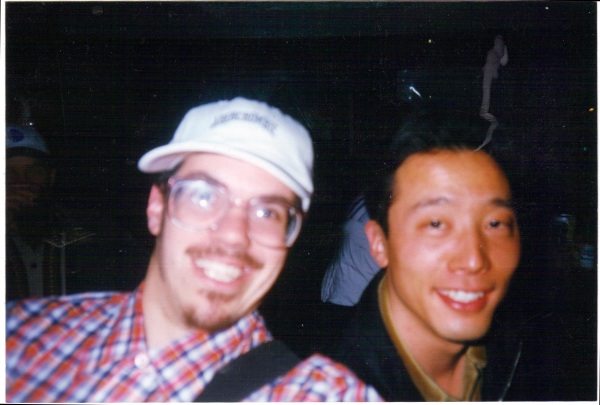 Seeing Kent inspired me to dig through my old photos and re live some amazing memories that I was so lucky to be a part of. SF in the 90’s was a hot bed for skateboarding, Graffiti, and hip hop, and Kent and I were right there in the middle of it.

The Dan Drehobl’s, the Julian’s, the McBride’s. Watching EMB and Hubba become legendary. Wallenberg. The Mission, when people still shot heroin. The 500 club. The Hills. The Burritos. Fort Miley. The Avenues.

Skateboarding was so pure and fun back then to me. It was raw, and I was lucky to be there.

I Met Cairo in 1993, in Florida, and I was lucky enough to be around this guy and skate with him and watch him go. It was no surprise to me, or anyone else, because this dude killed from the minute I met him. Great great great guy as well.

I snapped the top photo and the bottom photo (Frontside flip) was snapped by David Franklin, a much better photographer than myself.

Here’s the proof that I’m not a great skate photographer. I took both of these photo’s and even printed the second one. The top is Bobby Puleo and I can say this about Bobby, he is one of the fathers of the modern street style. Long before what’s goin on now, Puleo was skating weird spots, doing weird tricks other people weren’t doing, and was so consistant I often wondered if this guy was a robot.

Similar things could be said about Strubing. (ollie off a bump at Fort Miley) Justin never conformed to the slow roll tech bullshit, he did then, what’s popular now. He skated fast, he skated everything, and he did it faster and better than everyone else.

I saw Puleo last year in NYC, but haven’t seen Justin in a minute. What’s up Strubs?

Ok, so I’m not the BEST skate photographer. Fine. But this shot works for me. Bobby Puleo about to lock into a frontside smith grind while Matt McGrath and the hand of Matt Fields looks on.

What I lack in photographic merit in action shots, I make up for in grimy real life action. Here’s Puleo flexin his goose jacket with a marker in hand and a fresh ink spot on the wall to his left hand side. The skateboard scene and the graffiti scene and the hip hop scene all merged together to be a melting pot of future cliche marketing terms and ideas that scumbag energy drink companies are exploiting to this day.

Before he was the mastermind of Epicly Later’d, or the Vice guy, he was the Thrasher guy and before that, he was just some kid that I met while travelling in Ohio.

I’m strangely proud of this guy and excited that I know him. I like what he does, and hope someday he gets that Mark Gonzales episode we all know he wants.

Speaking of Mark Gonzales, have I mentioned lately how much I love the Gonz and that I interviewed him for my zine and that he’s by far the raddest dude I ever met and also, he’s funny as hell, and he’s way cooler than school.

What can I say? These are some of my favorite people in the world. I don’t get inspired like this anymore. It’s sad. I don’t feel surrounded by gold like I was in SF in the 90’s.

Long story short, this was the type of thing happening every other night in SF in the 90’s. Tommy G jammin in front of Thomas Campbells amazing paintings.