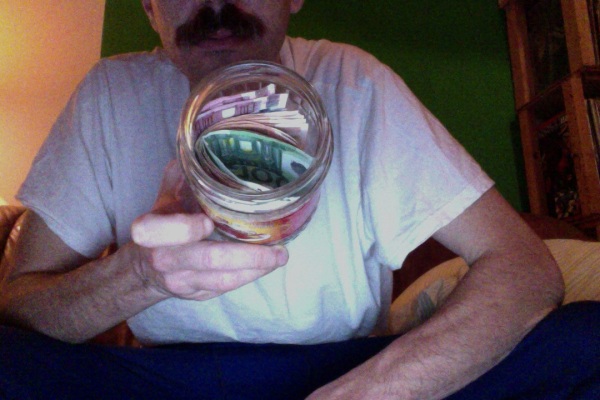 It’s Saturday night, and while many men are out on the town looking for a woman stupid or desperate enough to believe the absolute bologna that shoots out of mens mouths when they’re in a bar on a Saturday night trying to align their sex organs with a new place to live for a few minutes at a time, I’m home, in Berlin Germany, where the odds of getting a gig as a stand up comedian are somewhere between slim, none, and yeah right, loser.

So here’s what I’m gonna do. I’m gonna embrace the struggle, put a positive twist on this shit storm and answer a few questions. Who needs a stage and some spot lights? It’s 2013.

THIS IS A SHOW IN MY WORLD.

Q. COULD YOU LEND ME SOME MONEY?

A. Hell yeah James. I can. I mean I could. I could lend you some money, if say, I wanted to.

I actually have nine hundred euros in cash, stuffed in an old jar, sitting on my window sill. Of course, I won’t lend you the money, because honestly James, I couldn’t dream of an excuse as to why you would need that money more than I do. I plan on using that money to move to LA someday, so I can chase my heroin addiction, also known as my desire to make people laugh on a Saturday night, without having to explain to people why I speak English.

I just wanna be anywhere where my comedy is not defined by my language and more by, well, let’s say, my jokes, or even, my insanely cynical sense of humor. That would be fine.

I would love to lend you that money James, but I know you would just use it for something stupid, like rent, or food, or bills. Fuck that James. That’s no reason to beg, James. Plus, James, it’s Saturday night and you’re a comedian in London. If you’re gonna beg, why aren’t you at the SoHo comedy club begging David Mulholland to give you an open spot? Fuck money, James. Money is just paper. Money is nothing compared to the opportunity to make people laugh on a Saturday night. You sound like Kanye West, with his insane rants about billionaires and how he has ideas if people would just listen and how no one listens, and meanwhile, millions of people are watching the interview, and listening, and waiting for his great ideas, but instead, it’s the same old shit. Money. Power. Fame.

If only I had the money to express my ideas. I’D BE SO FAMOUS!

And in the mean time, James, while you’re chasing a glorified advert for the Queen, I’m slapping a six hundred word essay in the nut sac on the importance of good body language, and positive role models, and going down on a woman before you just ram it in, and many other secret messages I’ve hidden deep in the word count, because although I won’t lend you money James, I will indoctrinate you with my bullshit philosophies.

My number one philosophy is this James. FUCK MONEY.

James, I beg you, learn to live your life without money. Learn to eat twigs and shavings from pencils and old paper coffee cups, because the odds of me lending you any part of this nine hundred euros I have in this jar, have dropped from slim, to downright anorexic.

Well folks, that’s it for me. I’ll be here all week.

Have a safe night and remember to tip your imaginary wait staff.