More scans from negatives, from photos I took, from my travels to the World Famous Comedy Store’s weekly open mic, Potluck. Here’s a picture of the place itself. How grand. 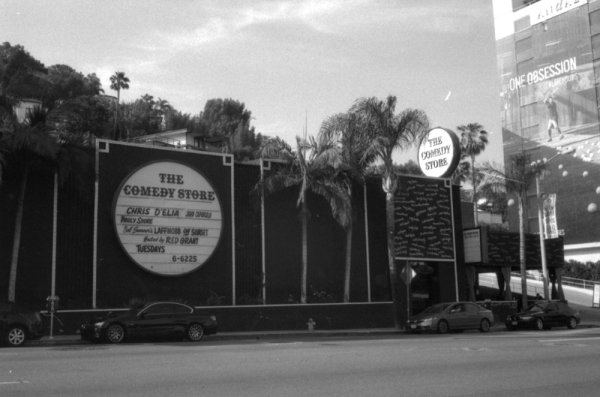 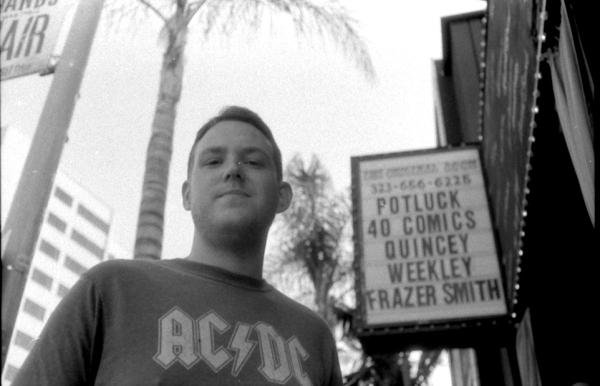 Sometimes a more famous comic will show up and everyone will get jealous and say things behind their backs. Like this guy below. Not the bald guy, idiots, that’s Ken Garr, I’m obviously talking about Drew Lynch, or “that stuttering comic from America’s Got Talent” as many of you probably know him as. 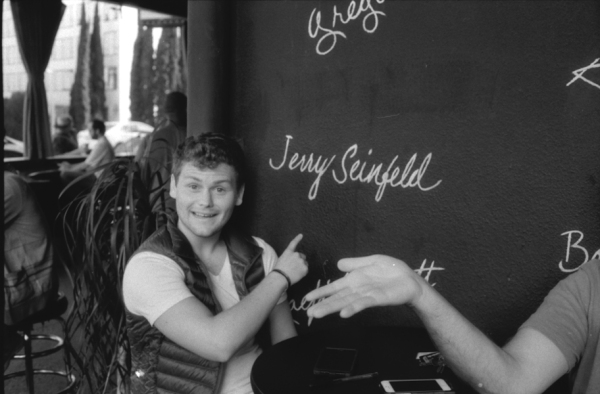 This is paid regular Jesus Trejo. Pronounced Hey Zues, Tray Hoe. Jesus comes around, and even though he did a spot before a sold out main room Louie show and crushed it, he’s still humble enough to give us plebs a fist bump and let us snap a photo. What a legend.

Ps. See that weird white mark on his chin? That’s something on the negative. That’s the risks of using a real camera. Many of you think it’s dumb. Use your phone. It’s easier. No thank you. I like the process of film. I like the risk of something fucking up. I like that it’s not easy. It’s like stand up. I like it. If I wanted easy I would do improv. 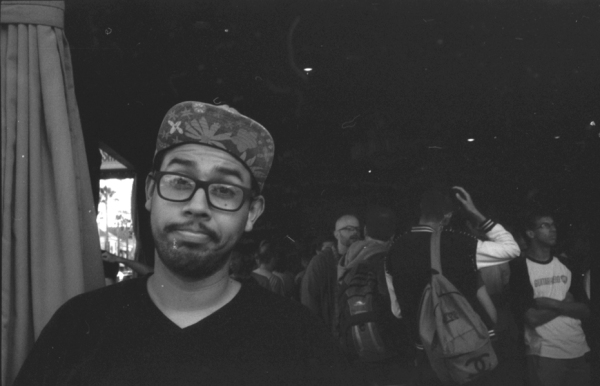 Ali Macofsky. Josh Nasar. Jeff Carrisalez, his Harley and of course, GT. The Comedy Store is a magnetic field for future great comics and also, complete fucking lunatics. I believe we have a bit of both in these four photos. You decide who gets what label. 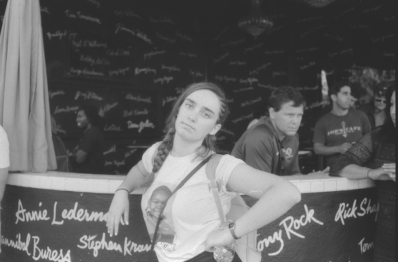 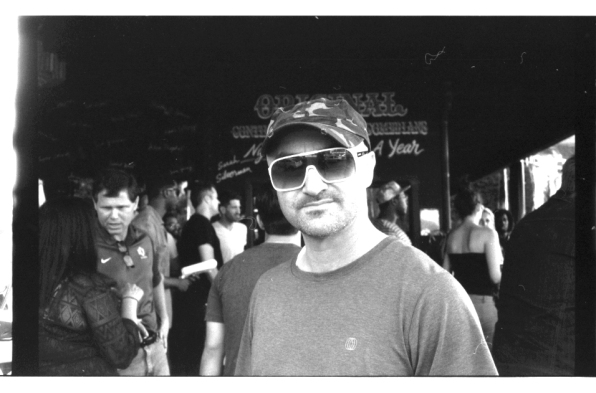 Check these guys out. They actually work at The Comedy Store. That’s Jay Mandyam. Stuart Thompson, Mike Schmitt and Feng Chao. Jay’s funny. One time I was lurking around with my camera and asked Jay (because I ask) “Hey man, can I take your photo?” To which he replied, “Why?” So I said, “No real reason. It’s just a hobby. I’m just taking pictures of Potluck.” To which he replied, “Um, no.” Making Jay the second person to deny me. The other person to deny me was Hannibal Buress, not at a Potluck of course, but at The World Famous Comedy Store non the less. Anyway, Jay’s not as intimidating as Hannibal is, so the next time, I didn’t ask as you can tell by his demeanor. Sorry Jay. 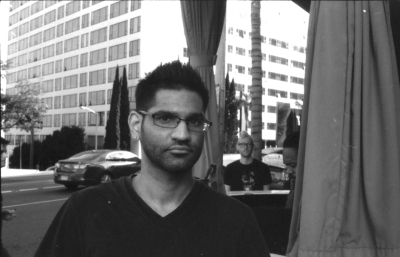 This is Brenton Biddlecombe, who’s also a paid regular at The Comedy Store. He hosts Potluck sometimes and can be seen all over town, I mean, once you know what he looks like. This is him. I bet now that you’ve seen his picture you’ll start to see him everywhere, but especially in your dreams. This photo was taken after the Potluck, at The Parlor, a show hosted by Jay Davis where great comedians bomb because the crowd is a bunch of rich entitled shit bags who expect everyone to cater their every need. It’s so fun to watch! 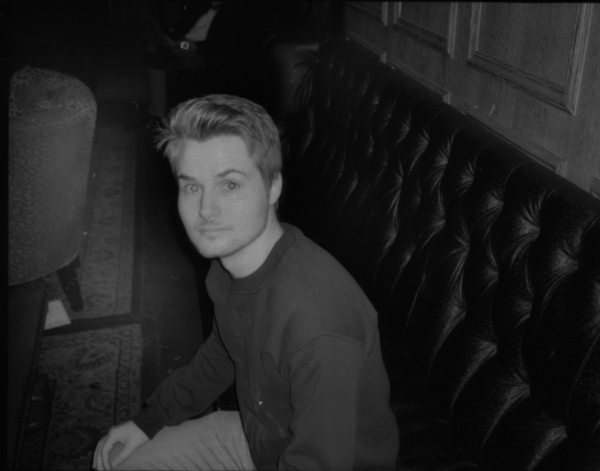 And last but not least, the big CLOSER! This is Jason Van Glass, but honestly, who cares what his name is, look how good that photo looks! This is why I play the game folks. This is a nice shot. It’s crisp, clear, balanced, and has a character to it. Piercing eyes. It’s telling a story. If you look long enough you will see this guy ax murder his girlfriend in 7 to 26 years from now because he doesn’t make it in the toughest artist outlet that exists. Comedy is tough and comedy at The Comedy Store is the super bowl of comedy shows, if the Superbowl was every night, of course, anyway. My point is, if Kanye West is such a genius let’s see him come down to The Potluck on a Monday night and make people laugh. 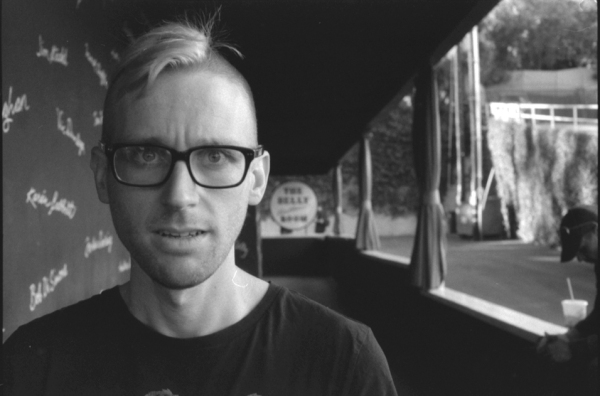 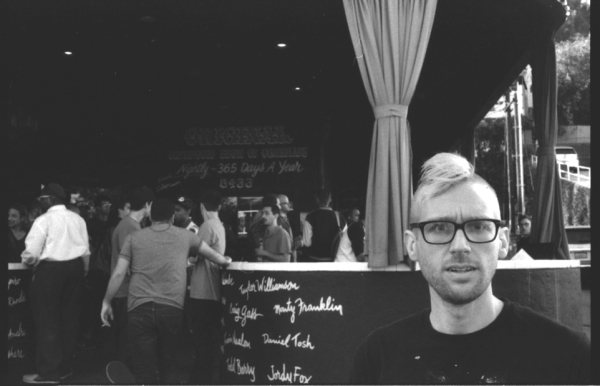